Go to the program

KKM University is a place where we can systematically learn various skills by watching videos of our professional instructors teaching techniques that can adapt to different situations through online classes in the non-face-to-face era caused by Cobid 19.

It was created to provide courses for special agents, women, children, police and security personnel as well as those interested in leadership and physical training, and further popularize martial arts through online competitions.

Our goal is to make yourself and your family healthy, not only physically but mentally, and ultimately to make a safer and healthier world.

KKM was established in 2013 by Chairman Koo Bon-geun.

Korea Ku’s Krav Maga proximity combat tactics are not intended to start a fight, but rather to survive and avoid dangerous or even life-threatening situations.

He developed KKM KU SYSTEM, which allows him to systematically develop and reorganize systems using his own experiences and skills to learn the best close combat skills while adapting to various situations of the general public, police and soldiers.

For example, a five-day clinical trial of Marines who had not been exposed to martial arts many years ago proved to be true.

Currently, KKM KU SYSTEM’s hands-on technology has been disseminated to each institution and the general public around the world, focusing on the popularization of Korean creative martial arts following K-pop, K-BEAUTY, K-FOOD and K-quarantine.

Our goal is to create a safe world

Click on the course you are interested in and you can learn various skill sets that suit your situation. Follow the instructor in the video at your own pace and watch as your confidence increases with each new skill acquired!

Become a certified KKM instructor and join us in creating a safe and better world. Through the online certification program, you can test your limits by training hard and take guided tests to help you advance through each level.

If you are already a teacher, don’t be afraid of a good challenge!

Subscribe to the Official KKM Krav Maga YouTube channel where you can find more training videos, tips and important information that is updated periodically!

Find the nearest KKM center near you and build friendships while practicing KKM skills. A better community can make life fun and healthy!

Our qualified instructors are more than eager to meet you at each KKM location!

Our instructors are ready to give you your KKM private lessons personally tailored to fit your needs!

Watch the video and practice. Anyone can do it easily. 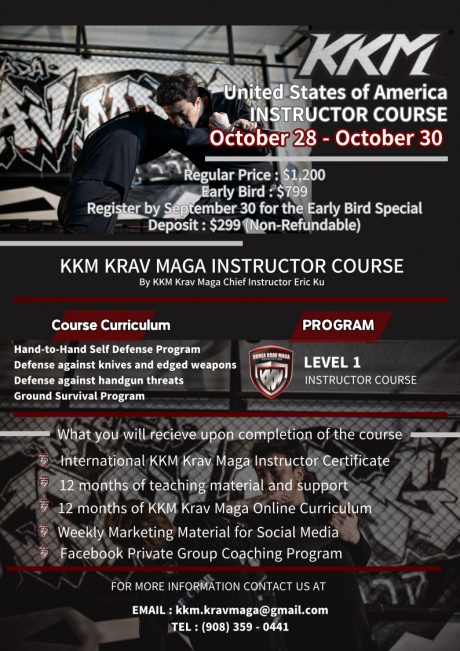